Schedule subject to change without notice.

On select Sundays in September, October and November, visitors may delight in the sounds of the 1902 J. H. & C. S. Odell & Co. organ in the Music Room and the 1901 Steinway and Sons model B art case piano commissioned specifically for the Drawing Room.

These two original instruments will be played by local musicians as part of the Museum’s conservation program. A variety of popular music will be performed including secular and spiritual pieces published or composed during the Gilded Age.

Highlights from the Flagler Museum Archive Collection will include recognizable tunes and examples of popular music from the classical composers Tchaikovsky, Pucci and Chopin. Opening Numbers will feature two-step openers from Gyspy Rose, Sleeping Beauty, Carmen and more! At the Ballet will include classical pieces from the infamous Tchaikovsky ballet Swan Lake and a medley of waltzes from composers such as Reinhold and Berenger.

Highlights from the Flagler Museum Archive Collection will include recognizable tunes such as "Play a Simple Melody" and "Happy Days are Here Again," as well as other examples of popular music with Florida as a focal point. Opera & Oratorio Melodies will feature familiar movements from operas and oratorio works by Verdi, Massenet, and Handel. La Belle Époque will include classical waltzes and joyful minuets from Europe's Golden Age, an era which coincided with America's Gilded Age. 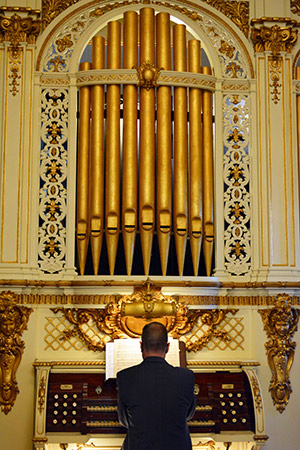 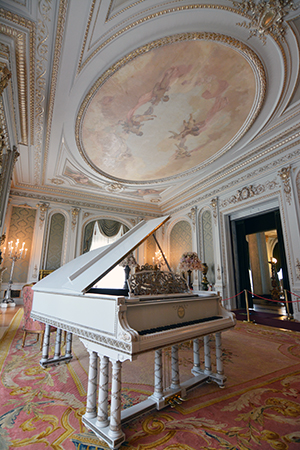 Learn about the talented local musicians who will be exercising our historic instruments during this Season's Organ & Piano Demonstrations:

As a dedicated harpist & pianist, Anne Akerson continues to enjoy a satisfying career devoted to music-making in South Florida. During the past 10 seasons at the Flagler Museum, Anne has combined a keen interest in American history, Florida East Coast history, the American Heritage, and a love for music and the arts as a "house" musician/presenter and special events musician for private events. Anne has been affiliated with the School of Music and Fine Arts at Palm Beach Atlantic University for 15 years as Staff Accompanist and currently specializes in ballet accompanying. Also a freelance musician, Anne is in steady demand as a wedding harpist & pianist and as a solo/ensemble musician for corporate, private, social, memorial & worship events. As organist, her work is offered in a substitute or interim capacity.

Anne is widely traveled both domestically & worldwide as a performing musician including three world cruises, orchestra concert tours, and numerous other music performance contracts worldwide. Undergraduate degrees & graduate music studies are from Hastings (Nebraska) College, the University of Nebraska, and the University of North Texas, respectively.

Stewart Wayne Foster is the Music Director and Organist of the historic Royal Poinciana Chapel in Palm Beach, Florida. Prior to coming back to his native Florida, he served eight years as the Organist in Residence at the First Congregational Church in Los Angeles, home to one of the world’s largest pipe organs.

Raised in Melbourne, Florida where he studied with Martha Root, Jack Jones, and Robert Hebble as a teenager, he later attended the Interlochen Arts Academy (High School) where he studied both organ and piano. He completed his undergraduate degrees at Stetson University in DeLand, Florida. He went on to receive his Master’s degree in the harpsichord and early music from the University of North Texas and, in organ, his Diplôme de Concertiste from the École Normale de Musique in Paris, where he lived for five years. While there, he was the continuo player for L’Orchestre de St. Louis-en-l’Ile, and accompanist for the Paris Choral Society, in addition to serving as assistant organist at the American Cathedral in Paris. His many awards include the Gold Medal and Audience Prize at the 1997 Dallas International Organ Competition (judges included the late Marie-Claire Alain and Gillian Weir); First Prize at the William Hall Organ Competition; First Prize at the École Normale de Musique; and First Prize at the American Guild of Organists’ Regional Competition. Known for his vast and eclectic repertoire, Mr. Foster has performed as soloist with the Dallas Symphony Orchestra, the Augusta Symphony, and the Charleston Symphony, and has accompanied numerous fine choral groups and vocalists throughout his career. He has released two CD recordings and one feature DVD, as well as appearing in the DVD highlighting the famed Walt Disney Concert Hall pipe organ in 2011. He has been interviewed several times on NPR’s Pipedreams. Mr. Foster has provided organ music for the film “Marie Antionette” (2006) and for the television shows “Ugly Betty” and “My Favorite Wedding.”