In January of 1896, Henry Flagler opened his second hotel in Palm Beach, which he named the Palm Beach Inn. It was a simple and unpretentious hotel overlooking the ocean a quarter-mile from Flagler's luxurious Hotel Royal Poinciana. During an expansion project in 1903, the Palm Beach Inn caught fire and was destroyed. By 1906 it was rebuilt and renamed The Breakers Hotel and opened to universal acclaim. Room rates started at four dollars a night and included three meals a day. The guest register read like a "Who's Who" of early twentieth-century America - Rockefellers, Vanderbilts, Astors, Andrew Carnegie, and J.P. Morgan vacationed alongside United States presidents and European nobility.

On March 18, 1925, twelve years after Flagler's death, tragedy struck The Breakers once again when another fire destroyed the all-wood structure. Mrs. Flagler’s family, who had inherited the Flagler System, were determined to build the world's finest resort as a testament to Henry Flagler's vision. The new resort would be constructed where the old hotel once stood. The notable New York-based architectural firm of Schultze & Weaver were invited to design The Breakers resort we know today. The Villa Medici in Rome was the inspiration for the new hotel’s facade. The Breakers reopened for the 1926-27 Season and featured more than 400 guest rooms that overlooked the ocean, sumptuous public spaces, and world-class amenities. Today, The Breakers remains an impressive masterpiece of Gilded Age luxury and one of the world’s great resorts.

Watch a Lecture about the Architects of The Breakers 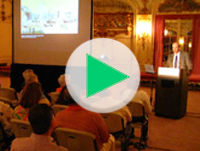 This lecture on architects Schultze & Weaver was part of the 26th Annual Whitehall Lecture Series on "The Architects Who Designed Palm Beach's Iconic Buildings." Jonathan Mogul is the Academic Programs Coordinator at the Wolfsonian at Florida International University. He co-authored "Grand Hotels of the Jazz Age: The Architecture of Schultze & Weaver."